YouTube has always been a big part of what I do with Hoopsfix. Everything online is becoming more and more visual, and the majority of my most viewed content on the site has always been video based.

Back in May, I was excited to receive an invite to the Google offices in London for a YouTube Partner Meet-Up. This session in particular was aimed solely at YouTube sports partners and intended to help us with everything from building a successful presence on the platform, to production tips.

After 3+ hours in the offices, a number of different presentations/speakers, and some great food, I headed home, mind buzzing with all the things I had just learned and excited to put them into action.

The results? Over the course of the next 30 days, pretty much every single metric that is measured in YouTube analytics went up, including a video view increase of 74% on the month before, and my subscribers net change increasing 55%. 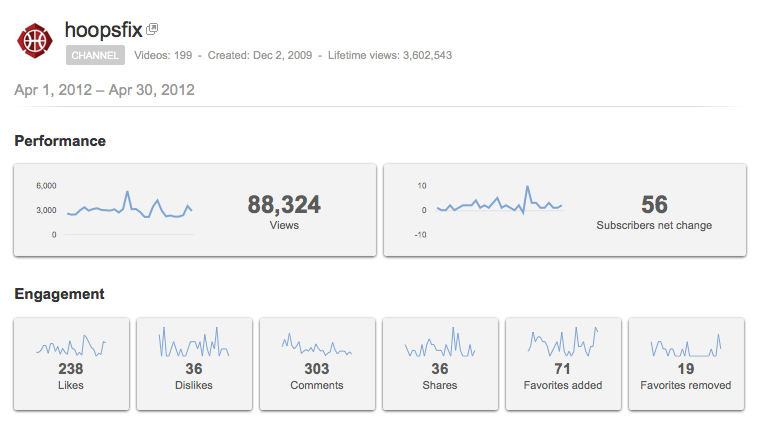 And here are the same metrics for May (post-meet up) 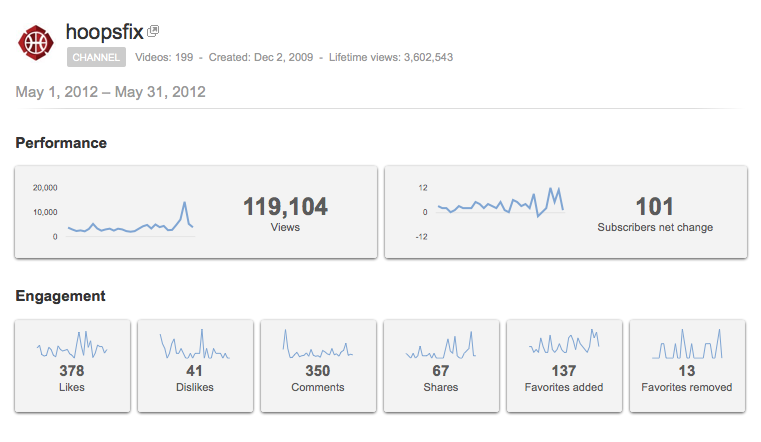 Of course, a number of external factors played a role (there was one video that did particularly well during the next month and ended up being aired on ESPN), but even removing that from the equation, everything remained markedly up.

Check it out in the below image which shows total YouTube views for the year so far – the arrow marks the date of the optimisations.

I have no doubt that the single biggest reason my YouTube views have increased so much is because of the strategies and best practices I was taught that day.

So what did I do?

YouTube annotations – the (sometimes annoying) little messages that appear overlaid on videos – are a way to add interactive commentary and calls to action on your content. You can use annotations to add background information about a video, create a story with multiple possibilities (viewers click to choose the next scene and get taken to a different video), link to related YouTube content, and encourage interactivity (e.g. “thumbs up for the flying dog” encouraging people to like your video).

With Hoopsfix, I was using annotations before, but since they are relatively new, I had over a hundred older videos that were released before annotations even existed! I went back through all my older videos (it turned out that the majority of my most viewed videos weren’t annotated) and added annotations. I primarily used annotations to encourage viewers to subscribe, and view other related videos from my channel as the video was coming to an end.

Don’t get it twisted, it’s boring and time consuming, but meta-data is so important! Metadata, loosely defined as ‘data about data’, in YouTube’s case, refers to your video title, description and key words. 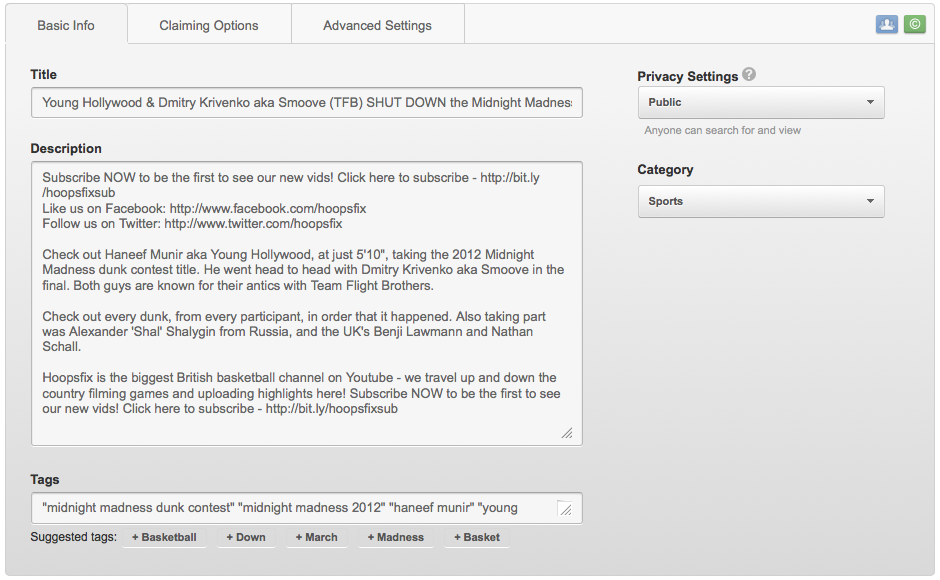 Essentially, you need to think about the type of terms people will be typing into search engines who will want to find your content.

Specific to my channel, that is normally player’s names, the event name, and other broader basketball terms. I had older videos from a UK summer event called Midnight Madness, originally just named “Midnight Madness Bristol 2009” – I edited and included some of the more prominent player’s featured in the video, wrote more in depth descriptions, and filled the keyword box with every potential keyword I could think of. Google recommended starting specific, then going more broad. For example, event name, players name, england basketball, british basketball, basketball.

Two useful tools to help with keywords to use are the Google Adwords Keyword Tool and YouTube Keyword Tool. Type in the terms you are looking for, and not only see how much they are searched, but also other good suggestions. Use these to influence your video title decision, include them in the description and of course in the keywords.

Ever seen those videos which have a great pair of breasts as the thumbnail – you click through (along with the other 3 million people) to investigate, only to find out you’ve been gamed and the content is actually nothing to do with boobs? That right there is the proof the impact a good custom thumbnail can have!

We were recommended to get a close up shot that accurately depicts what the content shows. Below, to the right, you can see the thumbnail that I originally had on a video of Luol Deng, which I have since optimized to the one on the left, using a photo of him I have permission to use.

I choose to also overlay text with my website URL on – this is more a branding exercise than anything, a lot of my videos get embedded on other websites so it’s just a way of viewers seeing the source of the video.

End cards must be done during the production phase of your video, they need to be edited in to your video file at the end of the content, and then made ‘clickable’ by using ‘Spotlight’ annotations. In the above picture you can see the type of end card I use in my videos (hat tip to Hoopmixtape for that). 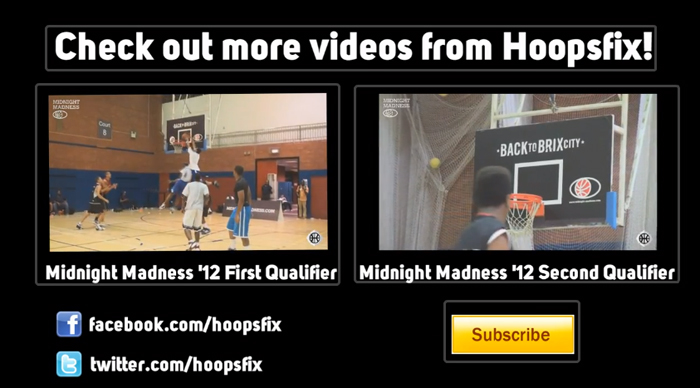 Though I used end cards before the meet-up, I didn’t do it on every video. Now, without fail, every single video I upload to Hoopsfix has an end card. Recently YouTube analytics have began to show the click through rates on my different annotations, and it’s not even close – the annotations on my end card have a far higher CTR than any others I place elsewhere during the video (which personally, I find distracting and turn off).

Sounds simple, but uploading regularly makes a huge difference to the community you can build. Prior to the Meet Up, I was uploading sporadically, whenever I had time to edit some stuff. I wasn’t making a conceited effort to publish regularly.

Over the course of the next 30 days, I uploaded 12 videos (compared to 6 the month before, it was easily the most I’d ever done), doubling my output from the month before. The nature of my channel makes it a little more difficult to keep a schedule (it depends largely on events going on), however, if you are a vlogger, or a cooking show for example, have a schedule and keep to it. The Google heads couldn’t emphasise this enough – if you tell people you are releasing a new episode every Tuesday, if will do wonders for your channel activity.

Ever searched something on YouTube and in amongst the results you see a playlist?

This happened to me many times, and rather than thinking about how I could use this to my channel’s advantage, it took the lovely people at Google to point it out to me. In my case, sometimes I have produced a few different videos from one event, so by batching them together into a playlist for that particular event, it has helped drive traffic by ranking for the name of that event.

7) ‘Other Channels’ on Homepage

YouTube wants you to be involved with the community, and that involves working with other content creators (channels). They have a handy feature which allows you spotlight other channels of a similar nature on your own channel homepage.

My initial thought was, “but what, I’ll be driving people *away* from my channel!”, though this is true, it was explained that it will also help you in two ways.

Obviously I can’t measure the impact that this has had, but it’s something I did that may have contributed, and regardless, helped others by pointing them to other relevant content they might be interested in.

Tent-Pole Programming – one of the things that was spoken about that I haven’t had the chance to test out properly is ‘tent-pole programming’. This is where you align your content strategy big events which are scheduled in the future. You release your video ahead of the event, creating pre-buzz and helping to rank for the term you know will be searched a lot after the event has happened.

As an example, with the Olympics having just finished – a month before I should have produced an ‘London 2012 Olympic Basketball Preview’ video. I’m almost certain it would have driven a lot of views, but unfortunately I just didn’t have the time to source the footage and execute it!

YouTube’s Creator Playbook – this is simply a must have resource for anyone hoping to grow their YouTube presence, and it’s free! There is so much great, actionable advice in here, I refer to it on a weekly basis – it is the YouTuber’s bible!

Christopher Sharpe – Christopher is a director/producer/editor, and the man behind the camera for the reputable Hilah Cooking (YouTube Next Chef winner, 25,000 subscribers and counting). The advice he provides on his blog about YouTube, and their experiences with Hilah Cooking is some of the best I have read, in particular his 7 tips for increasing your YouTube views.

Chris Pirillo’s 50 YouTube Tips & Tricks – Chris, and his YouTube channel Lockergnome are now approaching 200k subscribers (!). When he surpassed 50k, he wrote this really useful blog post, with a lot of great tips in it.

So, that’s pretty much me done! If you are a YouTube partner, or even have a YouTube channel and have any other tips, please share them below! I’m always looking to learn, and wish more people would document behind the scenes stuff of their big YouTube channels!

Straight From the Horse’s Mouth: 8 Tips from YouTube on How to Grow Your Audience